HUMAN’22 is the fifth workshop of a series for the ACM Hypertext conferences. It is sponsored by SIGWEB and affiliated with the 33rd ACM Conference on Hypertext and Social Media. It has a strong focus on the user and thus is complementary to the strong machine analytics research direction that could be experienced in previous conferences. The user-centric view on hypertext not only includes user interfaces and interaction, but also discussions about hypertext application domains. Furthermore, the workshop raises the question of how original hypertext ideas (e.g., Doug Engelbart’s “augmenting human intellect” or Frank Halasz’ “hypertext as a medium for thinking and communication”) can improve today’s hypertext systems. In line with the HT’22 conference, the HUMAN’22 workshop will be held hybrid, that is, taking place in Barcelona and streamed via Zoom. For further information see the workshop website and follow us on Twitter.

Historically, hypertext is strongly connected to human factors. This can be experienced by the early work provided by hypertext pioneers, such as Doug Engelbart or Ted Nelson. However, recent hypertext research focuses mostly on machine analytics. This workshop wants to broaden the scope again by taking the human back into consideration. In order to accomplish that, the workshop combines original hypertext ideas with recent hypertext research trends. Furthermore, it tries to consolidate different hypertext areas by looking at those from a human factors viewpoint. HUMAN also encourages to submit work that has an interdisciplinary perspective. It targets both scientists and developers from various research and business areas who consider a critical and open-minded discussion of original hypertext ideas with the goal to identify and solve today’s hypertext challenges. Relevant topics include (but are not limited to): 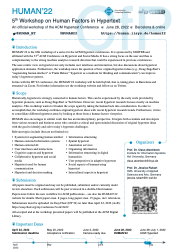